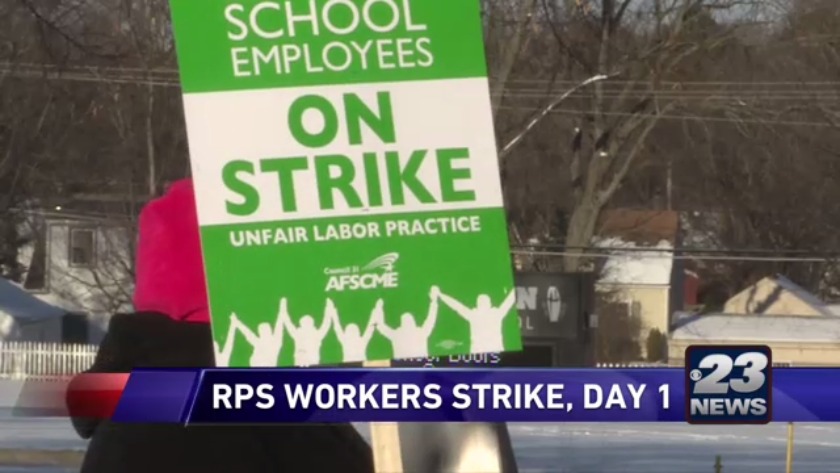 UPDATE: ROCKFORD, Ill. (WIFR) -- One union leader is calling the RPS union worker strike a success, saying he feels its sent the Rockford School Board a strong message.

Over the past three days, RPS union workers say they've seen an outpouring of support from parents, students, teachers and now politicians and political hopefuls.

"The support has been overwhelming," says AFSCME Council 31 Regional Director Joe Bella. "It's always nice to know the parents appreciate the work the folks do in the classrooms....It just meant so much, and means so much."

During the course of the strike, several local and state politicians have expressed their support for school employees, from State Representative Litesa Wallace to Alderman and Mayoral Candidate Tom McNamara, and now candidate for Illinois Governor Chris Kennedy. He feels these workers are vital to our children's success and says he wants to see them compensated fairly.

"I stand with union workers today to stand up for the notion that we need to educate our children and do so with great employees," says Kennedy. "Great teachers, great parapros, great bus drivers, that's the future of our country."

Now strikers are preparing to return to work Monday. Many of them remain optimistic an agreement can be reached with the district.

"Hopefully we'll hear from the school board and they'll say let's get back to the bargaining table and negotiate in good faith," says Bella.

Bella says union employees will meet at their workplaces Monday to walk in together as a show of solidarity. The district says attendance has been down during the strike, telling us last Thursday 92 percent of students were in school. Yesterday, only 78 percent of students showed up.

UPDATE: ROCKFORD, Ill. (WIFR) -- Today marks day two without hundreds of Rockford Public School's union workers. RPS families feel their absence and while many teachers do too, some at one Rockford elementary school stood in support of them.

AnneMarie Urbanksi is just one of dozens of Rolling Green elementary teachers who spent part of her morning on the picket line with union workers.

"They are so important to the functioning of what goes on in our daily routines," says Urbanski. "They support the children in ways people don't realize. They support us. They really keep the school functioning properly."

The fourth grade teacher says the past two days have been difficult without her paraprofessionals and without buses bringing kids into school, attendance has been down.

"A lot of kids were absent," says Urbanski. "Regular lessons were being run, but they're not the same."

The absence of hundreds of paraprofessionals, bus drivers and nutrition workers is felt by most RPS families. The school district says average attendance is down from this time last week, lunch is limited, and 65 teachers reportedly didn't show up to work on Wednesday.

"I think students are safe, they're getting fed, they're getting to and from school and as far as I can tell, things are going as well as they can," says Rockford Public Schools Superintendent Dr. Ehren Jarrett.

Traffic has also been a major concern near schools while the buses aren't running, something the Rockford Police Department has been preparing for. They say they're making sure officers are out one hour before school starts and dismisses to help direct traffic.

"Be patient with us," says Sgt. Timothy Speltz, with the School Resource Unit. "The schools, the police department, the staff in place, we're doing the absolutely best job we can and we're trying to manage the traffic issues."

In the meantime, parents and teachers like Urbanski say they're hopeful employees will return to work on Monday as scheduled.

Dr. Jarrett says there hasn't been much movement in negotiations. he feels the district has already implemented the last best offer.

RPS has brought in over 100 district employees to fill in for those on strike.

"Honestly, we'd rather be at work," says Duncan, a paraprofessional. "We just want to be with our kids, we just want to do our jobs and the district's kind of left us no choice."

After months of negotiations between the district's labor unions and the school, more than 900 bus drivers, paraprofessionals, and nutrition service workers are striking. Although the district is offering them raises, they say insurance costs will rise and covering that, would eat up any extra pay.

"I'm taking home more than $200 a month less," says Duncan. "So that hurts me. I'm a single parent with three children. I need the little bit of money that I do get."

District 205 parents are also feeling their absence. While some understand the strike, others feel upset and inconvenienced.

"I understand where they're coming from," says Rolling Green parent Amy Henry. "I do feel for the parents though, that this is going to be hard trying to get kids back and forth."

"I have to deal with traffic," says Michelle Vieau. "I have the gallery. I'm going to have to close the gallery early tomorrow because I have to go pick her up from school now."

After the strike, Duncan hopes the two parties will be able to reach an agreement.

"I want to ask Mr. Jarrett to please negotiate with us because we want to do our jobs," says Duncan.

A few teachers crossed the picket line as well to show their support for union workers. Union leaders say they expect all workers to return on Monday. No exact date has been announced for when both sides will negotiate again.

UPDATE: ROCKFORD, Ill. (WIFR) -- More than 900 Rockford Public School union workers are walking the picket lines today after no progress was made in negotiations with the school district.

Even though schools are open, the district's paraprofessionals, bus drivers and nutrition service workers will not report to work over the next three days. They feel the district's final contract offer would result in pay cuts for them because of an increase in insurance premiums. During the strike, buses will not run, lunch menus will be limited and students who work with paraprofessionals will now meet with other district employees.

Union employees are expected to return to work on Monday. No exact date has been announced for when union leaders and the district will negotiate again.

ROCKFORD, Ill. (WIFR) -- The final hours are here and now 28,000 RPS students may be affected throughout the next three days at RPS schools in some way shape or form.

Some says the numbers don't quite seem to add up. Nearly 900 rps workers will not being showing up for work tomorrow however RPS superintendent Dr. Ehren Jarrett says the district will deploy nearly 100 faculty members from the district office as well as substitutes to assist over the next three days.

Parents will be doing double duty tomorrow morning and possibly for the next three days by taking their kids to and from school as the district will not provide transportation.

This comes as hundreds of rps workers plan to strike RPS superintendent Ehren Jarrett says the majority of the district office will be deployed in different buildings and substitute teachers will also be called in to help.

Again that's well over 100 district staff members who will be changing roles from their district office for the next few days to help with the shortage of nearly 900 nutrition service workers, paraprofessionals and bus drivers.

Dr. Jarrett says if employees do show up tomorrow they will welcome them back and they will deploy them immediately preferably into their own building. Jarrett stressed that student safety and schools being staffed is the districts top priority.

The district has a command center to move faculty around as needed. The district says no district buses will run tomorrow however special education and early childhood buses through sunrise will still run. We'll have a live report on the strikes on 23 news this morning.

Rev up for Hot Wheels Monster Trucks in Rockford

Rev up for Hot Wheels Monster Trucks in Rockford