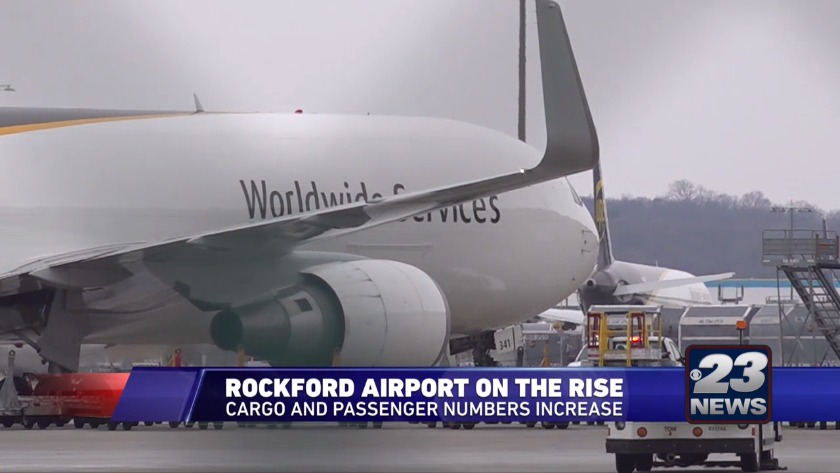 "We're seeing more and more interest on a daily and weekly basis from airlines," says Executive Director Mike Dunn. "The cargo industry has figured out Rockford, [and] that we are a great little airport, we are 60 miles from the Chicago market."

The airport grew it's cargo numbers by 11 percent in 2019. It hauled 2.3 billion pounds of cargo. "We are centrally located for the Midwest market and they understand that they can get their planes in here, unloaded and to market faster more efficiently and at a lower cost," says Dunn.

The airport is the second largest UPS hub in the nation. Dunn says that is a crucial part of the cargo success, but also says expansion with Amazon helped the numbers soar.

Cargo was not the only increase at the airport. About 250,000 passengers packed their bags and traveled through the airport last year, which made it a record high.

Passenger growth increased 7.5 percent in 2019 after adding two new destinations to Florida. "People should take advantage of this, it's excellent," says Betsy and Art Musinski, who are traveling to Florida. "We have friends that live in Wisconsin that come down and they have family in Iowa that come out. So people know about it."

They say it's the obvious choice when it comes to picking Illinois airports.

Executives say the airport's growth is also beneficial to the local economy. "In the last several years we added 2,000 jobs at the airport, and we anticipate in 2020 another thousand jobs," says Dunn.

Rockford was the only Illinois airport that grew its cargo operations in 2018. Last year it was named the fastest growing cargo airport in the world. it offers eight nonstop destinations, and is serviced by Allegiant and Apple Vacations

Dixon police officer gets creative with the community

Dixon police officer gets creative with the community